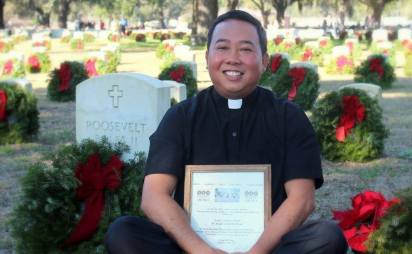 This years ceremony is coming together thanks to all the fundraising groups, volunteers and sponsorships.  Father Martino from St. Boniface Catholic Church in Springfield will participate for his second time this year. Father Martino has quite a “life purpose” with difficult beginnings in Saigon, VietNam shortly after the war.  He was born  Father Martino Bá Thông Nguyen, and his father a South VietNam officer led to the imprisonment of both his parents.  After years in a refugee camp near the Cambodia border,  the family made their way to Chicago.  After graduating college he made began his studies in pre-theology at St. Mary’s Seminary in Baltimore, he was ordained a priest in 2004.  Father Martino also founded an organization named One body One Village, their mission statement reads:

Mission
“To combat child sex exploitation and trafficking especially in Southeast Asian countries, by rescuing at-risk and affected children, educating and empowering communities to be catalysts for change; and

To improve the lives of at-risk and affected children by providing shelter, medical and behavioral health care, educational assistance, and vocational training that will enable survivors to reintegrate into mainstream society as productive citizens.”

Enjoy living in Rincon Ga for 25 years
View all posts by gabilady →
This entry was posted in Happenings and tagged Sponsor a wreath, things to do, Wreaths Across America Beaufort. Bookmark the permalink.